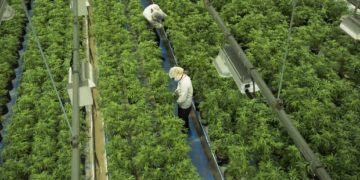 Congress is taking another stab at following Canada's lead by ending long-standing federal prohibitions on marijuana in the United States. 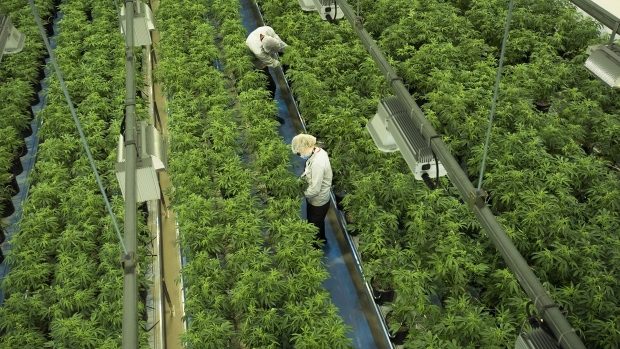 PHOTO: Staff work in a marijuana grow room that can be viewed by at the new visitors centre at Canopy Growth facility in Smiths Falls, Ont. on Thursday, Aug. 23, 2018. Canopy Growth Corp. says it will open its first retail cannabis stores in Alberta. THE CANADIAN PRESS/Sean Kilpatrick

WASHINGTON — More than three years after legal cannabis arrived in North America on a national scale, Congress is taking another stab at following Canada’s lead by ending long-standing federal prohibitions on marijuana in the United States.

A meeting today of the House of Representatives rules committee is expected to set the stage for debate Thursday and a vote as early as Friday on New York Rep. Jerry Nadler’s Marijuana Opportunity Reinvestment and Expungement Act.

Canada’s cannabis industry will be watching, albeit with low expectations.

If passed by both the House and the Senate and signed by President Joe Biden, the bill – known as the MORE Act – would help clear the way for the industry’s expansion by declassifying marijuana as a controlled substance.

It would also eliminate criminal penalties for possessing, cultivating or distributing pot, impose a new tax regime on production and imports, create a system to expunge convictions and make federal loans and services available to cannabis-based businesses.

It has a long way to go, particularly in the Senate, where Majority Leader Chuck Schumer, another New York Democrat, is likely to prioritize his own bill: the Cannabis Administration and Opportunity Act, expected in the upper chamber next month.

Industry observers have seen this movie before.

“I am skeptical as to whether the Senate is actually going to get on board with that particular legislative agenda, let’s put it that way,” said Jaclynn Pehota, executive director of the Association of Canadian Cannabis Retailers.

“I remain skeptical about how much of a priority this is, in a meaningful way, for people who are actually making policy agendas.”

Regardless of their chances, both bills have been shaped and informed by Canada’s experience with the legal-pot landscape, said David Culver, vice-president of global government relations for Canopy Growth Corp., based in Smiths Falls, Ont.

“They are aware of the Canadian model and the pluses and the minuses of the system, because I talk about it all day, every day,” said Culver, who routinely lobbies Capitol Hill for one of the largest players in Canada’s legal cannabis market.

Like smaller state-level markets throughout the U.S., the Canadian market has been a “crystal ball” of sorts for legislators, he said.

“We can see what’s worked and what hasn’t worked. Some of the lessons within these bills they’ve taken to heart, but others they haven’t.”

One significant problem is taxation, Culver noted: if excise taxes are too high out of the gate, the black market for cannabis will only continue to thrive. “You need look no further than Canada and California to understand that years after legalization, that illicit market is still the dominant force.”

The U.S. cannabis landscape is an ever-changing patchwork. The drug is legal for medical purposes in 39 states and for recreational use in 19, as well as D.C. But federal law still considers it a Schedule I controlled substance with high risk of abuse and no accepted medical use, alongside drugs like heroin, LSD and peyote.

That makes it impossible for companies operating in a legal landscape like California or Colorado to make use of institutional banking or financing services, access capital markets or do business outside their respective state lines. Nor can they write off routine business expenses, capital equipment or payroll costs.

If neither bill survives Congress, the Senate still has options, such as the SAFE Banking Act, which has already been passed by the House and would eliminate the federal barriers that deny cannabis businesses access to financial services and capital markets.

Eliminating those barriers “would be a real positive, from a Canadian perspective,” said Pehota.

“It would really accelerate and expand access to basic business services like banking and insurance, which remains very, very challenging for Canadian cannabis businesses to acquire because of the illegality of cannabis at the federal level in the United States.”

There’s another wrinkle, and that’s the White House.

While Biden promised during the 2020 election campaign to decriminalize cannabis and expunge convictions for non-violent offences, he’s been largely silent on the issue since taking office just over a year ago.

Indeed, Biden’s federal spending plan, out this week, was seen by some as openly hostile to legal pot. It included no provisions to allow D.C. to create a legal marketplace, and made no mention of protecting state-level cannabis markets, expanding research efforts or safeguarding benefits for veterans who use medical marijuana.

Legalization in the U.S. might be good for Canadian giants like Canopy and Tilray Inc., both of which are already making acquisitions and deals south of the border that are structured to set the table for a different legal landscape without getting offside with regulators.

But for smaller players, the prospect of a looming legal market that’s nearly 10 times the size of Canada could be a daunting one.

“The U.S. suddenly becomes both a threat and an opportunity,” said Michael Armstrong, a business professor at Brock University in St. Catharines, Ont., who watches the North American cannabis sector closely.

“Canadian companies who now have a couple of years of operating experience under a legal regime have learned how to mass produce. (U.S. legalization) would potentially be a big opportunity, a whole new market,” Armstrong said.

“However, it’s also a threat because right now, the Canadian industry doesn’t have to worry about American competitors.”

Unlike in Canada, social justice issues like ending criminal penalties and expunging non-violent cannabis offences are a central feature of the legalization effort. Nadler in particular is chairman of the powerful House Judiciary Committee.

For Culver, the criminal justice reform component of the effort is the most urgent aspect.

“The unintended consequences of inaction are severe,” he said.

“If we don’t act on cannabis reform sooner rather than later, we’re going to continue to arrest hundreds of thousands of people – this year, we’ll arrest over 300,000 people, again – unless reform is done.”