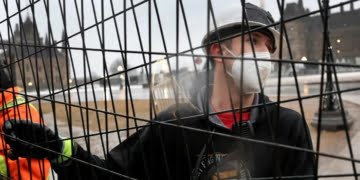 Justin Trudeau's use of the Emergencies Act 'has set a dangerous precedent,' the non-partisan Canadian Constitution Foundation said. 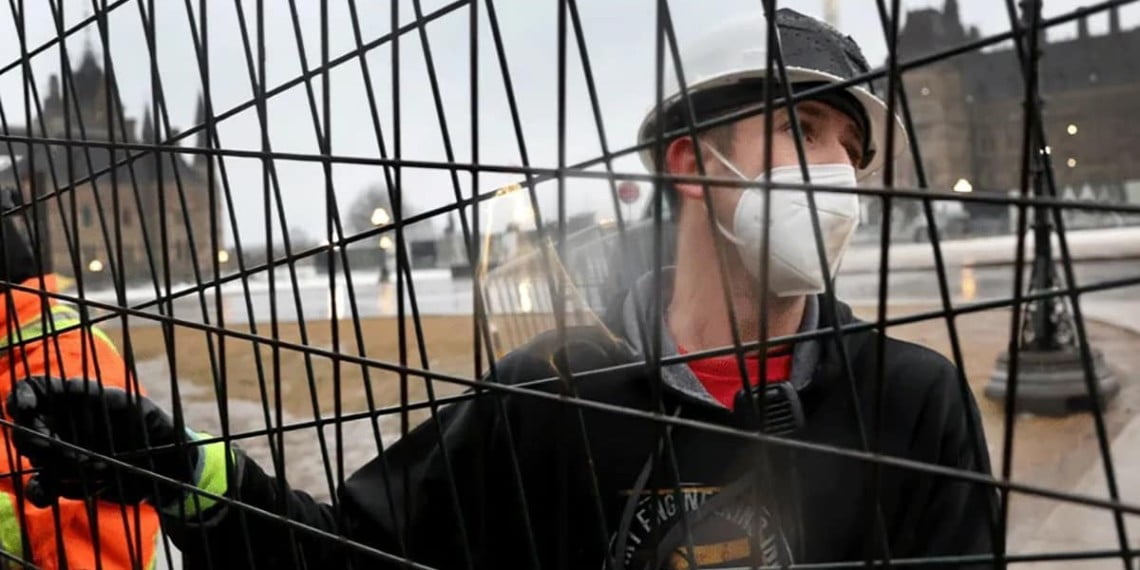 PHOTO: Workers construct a barrier around the parliament buildings in Ottawa on February 17, 2022 after Prime Minister Justin Trudeau invoked the Emergencies Act to try to put an end to a blockade by truckers to protest COVID restrictions. PHOTO BY SCOTT OLSON/GETTY IMAGES

Two separate legal challenges were filed on Thursday against the federal Liberal government’s invocation of the Emergencies Act by civil rights organizations accusing Prime Minister Justin Trudeau of setting a dangerous precedent by invoking the act for reasons they say fall far short of the necessary legal thresholds.

“The government brought in an extreme measure that should be reserved for national emergencies, a legal standard that has not been met.”

Emergency powers, she said, cannot and must not be normalized in Canadian society.

Joining the CCLA in challenging the government was the Canadian Constitution Foundation (CCF).

“The federal government has invoked the Emergencies Act as a matter of political convenience,” said CCF Litigation Director Christine Van Geyn in a press release announcing the foundation’s legal challenge.

“This is illegal and violates the rule of law, and that’s why we are challenging the government in court.”

The prime minister invoked the Emergencies Act on Monday, insisting it was necessary to bring an end to protests, initially provoked by the federal government imposing vaccine mandates on cross-border truckers, that have snarled downtown Ottawa and interfered with Canada–U.S. border crossings. Freedom Convoy supporters have parked an array of transport trucks, heavy equipment and passenger vehicles in front of Parliament Hill and throughout the Ottawa city centre.

That action was soon followed by convoy-affiliated blockades at several Canadian border crossings, starting near Coutts, Alta., two weeks ago and spreading elsewhere — most notably a days-long blockade at the Ambassador Bridge, a vital trade link between Canada and the United States.

Police began arresting some protestors after 5 p.m., including Freedom Convoy organizer Chris Barber, who was handcuffed and led away surrounded by police while crowds shouted their disapproval.

At the same time, police closed exits on Highway 417 through the city’s core.

Nearly 100 police-manned checkpoints will control access into the secure zone, barring those with no lawful purpose from entering the area.

The prime minister on Thursday defended his use of the Emergencies Act and described it as a measure of last resort. However there have been questions raised by security experts as to why the government needed to invoke the act, considering police managed to largely clear the border blockades before the emergency measures came into effect.

“They are not geographically limited, they do not target specific protests, they apply universally across the country.”

On Wednesday, federal cabinet ministers referred to the blockades as an organized attack against Canada’s sovereignty, with money and oversight coming from out-of-country.

Public Safety Minister Marco Mendicino said on Thursday another convoy was intercepted while en route to Windsor, allegedly to establish a fresh blockade.

“It can’t be allowed to happen,” he said.

“Law enforcement must have the tools they need to ensure that these crossings stay open.”

The government said invoking the Emergencies Act offers police “targeted and time-limited tools” that allow them to clear blockades — including downtown Ottawa — while also safeguarding protections guaranteed by the Charter of Rights and Freedoms.