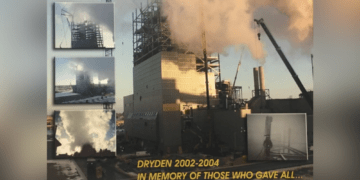 Occupational exposure series: Mill workers exposed to toxic substances have been left out in the cold, says advocate. 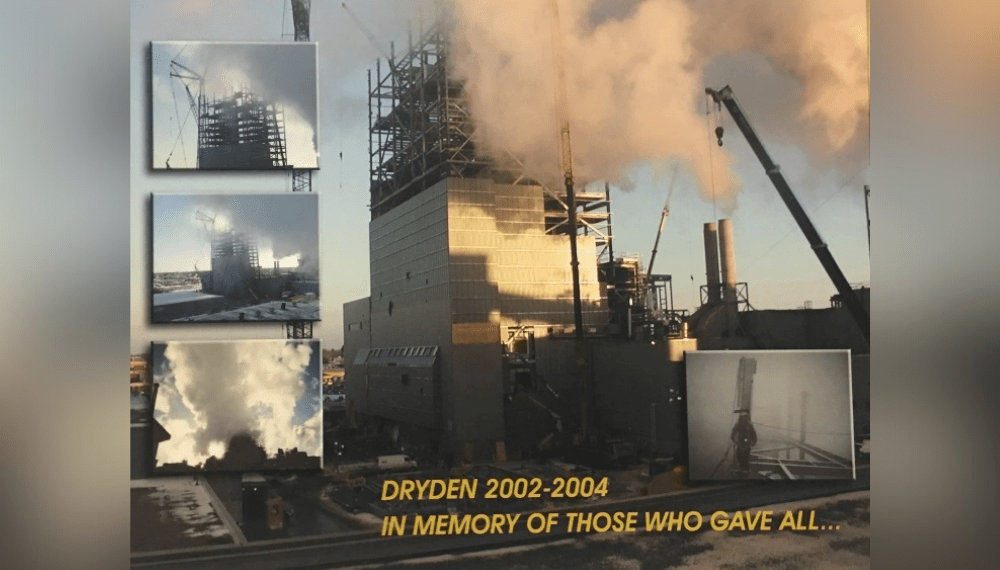 “The thing about the Dryden cluster is Weyerhaeuser knew this was going to happen,” says Jim Littleford.

In 2002, American timberland company Weyerhaeuser decided to build a recovery boiler (RB4) at its paper mill in Dryden, Ont.

From 2002 to 2004, hundreds of workers worked on the project. The new boiler was supposed to reduce emissions into the air around Dryden.

But it was built right behind the main stack, and there were chimneys all over the site. In addition, those on the project worked while the mill continued to operate which advocates have since said exposed the workers to extensive fumes from the paper mill stack.

“When the wind blew in a certain direction, it blew it straight into the building as we were [working on] it. The building kept going up higher, and when it got up level to the stack it really got bad. The smoke would just pour out of the stack, or into the various chimneys from around the site into the building.

The worst days were when the wind was blowing that way,” says Littleford – and it did often due to the layout of the project, “we were getting gas steady.”

“They knew it was going to be bad, they were given several options to make the job safer. They could have moved that building a little bit. Reps were trying to talk them into moving it or changing some things, or even shutting down the job on the days that the was bad. Weyerhaeuser was having nothing to do with it.”

“There were times when there was a scheduled ministry inspection and on those days the paper mill would shut down all the chimneys and vents, so that when the ministry showed up there was no stuff coming into the buildings and they would get no readings on their tests.”

He also explains that there was little to no union support:

“Our unions stabbed us in the back,” says Littleford.

He says that there was a lack of PPE available to the workers on the project. Littleford explains that though the workers were given respirators, they were for escape only:

“When guys started dropping and getting sick, they were telling us that we had to wear these masks to work in,” says Littleford. However, the mask manufacturer – 3M – would not guarantee them to be used all the time as they were escape-only masks (masks only supposed to be used in the case of a really bad gas-related scenario, wherein workers should wear the masks while exiting the project).

Littleford says that when he was working on the project, the conditions were rough:

“Guys were dropping left and right being overcome with fumes. I myself was overcome twice; I woke up once in the lunch room and I had an oxygen mask on, and when I came to they sent me back to work.

I woke up a second time […] in the Dryden hospital waiting room. Dryden is a small town, so they depend on the paper mill for the whole town’s living,” he says.

He says that workers were going in “bus loads” to the hospital, unconscious or feeling sick, “and Dryden hospital never admitted them. They would leave them in the lobby, give them oxygen and send them back to work.”

Littleford says that the workers were never officially admitted to the hospital so as to have no administrative trace of them. Years later, this is causing issues as workers attempting to make a WSIB claim cannot show official records.

COS has reached out to Dryden Regional Health Centre for comment.

In the years since the project, workers have developed a wide array of health conditions which advocates say have barely been recognized by the Workplace Safety and Insurance Board (WSIB).

And at the time, he says, the workers didn’t know what kind of chemicals they were being exposed to.

Occupational Health Clinics for Ontario Workers (OHCOW) had investigated the exposures at the time and had diagnosed around 160 workers with Chronic Toxic Encephalopathy (CTE).

CTE is not recognized by the WSIB as an occupational illness, Littleford says that all 162 workers who had applied for CTE benefits were denied their claim.

A spokesperson for the WSIB responded to the claims, saying that:

“Each claim is different and reviewed based on its own merits. When we look at any claim, we rely on the best scientific evidence available as well as information about all of the person’s illnesses, workplace exposures and other relevant factors. In some cases, evidence linking a person’s workplace exposures to the development of a disease does not exist.

Despite the fact that a claim may be filed for a specific diagnosis, such as CTE, when we review all of the information in the claim the facts may not support that diagnosis. Therefore the claim could be denied for the initial diagnosis and allowed for another diagnosis supported by all of the facts of the case.”

The WSIB presents a different set up numbers than Littleford saying that there were 286 claims registered related to the project, decisions were made on 229 claims while 57 were withdrawn or requested information was not provided. Of the 229 decisions made, 90 per cent (205) were allowed and 10 per cent (24) were denied.

“We make decisions with the best information we have available to us at the time. If new information becomes available, a reconsideration of a decision can be requested.

Following that, if someone disagrees with a decision, they may appeal through a two level appeals process, which includes the independent Workplace Safety and Insurance Appeals Tribunal (WSIAT),” says the WSIB.

If someone has questions about a previously denied claim, they should contact the WSIB at 1-800-387-0750.

The difference between the Dryden cluster and all of the other clusters COS has reported on is that workers were exposed in the short-term.

“I know all these other clusters, they were stuck working at these jobs for their whole lives and they’re paying in a different way,” he says.

But though the exposure was short-term, it was intense.

Workers experienced immediate effects as a result of the exposures, says Littleford.

“Everyone at the time had memory problems, you couldn’t remember stuff,” he says.

He also says that workers had gastrointestinal problems – he himself had digestive issues for three years after working on the project.

“People had teeth and fillings falling out. It was a whole pile of different health problems because nobody knew exactly what chemicals were coming out of [the fumes],” says Littleford.

And on top of these immediate issues, over time workers have developed other issues – not just CTE.

These illnesses have impacted the workers’ health, but also their livelihoods.

“There’s widows, there’s people whose lives have been ruined, living in poverty. People who couldn’t work in the trades anymore had to take menial, low-paying jobs when we were making good money,” says Littleford.

Littleford himself was able to work until he started having seizures – he and his family had to make a number of lifestyle changes to support his condition.

“And I’m one of the lucky ones, I’ve been able to work,” says Littleford, thanks to an experimental drug.

“I got up some days, I didn’t even know who I was or where I was after the seizures,” he says. Now, with the drug, “a couple of months after, my memory started coming back, and it kept getting better and I’ve gone right back to work. But I lost six years where I couldn’t work, I was in a fog all the time.”

Littleford says that a documentary about the paper mill workers by W5 released in October 2021 has changed a lot of things. He says that organizations such as the WSIB and OHCOW are taking the advocate’s claims more seriously.

After years of hard effort, Littleford and the Thunder Bay Injured Workers Group managed to get OHCOW to reopen the investigation into the paper mill.

OHCOW has started a retroactive exposure report on the mill workers, and they are doing another intake clinic.

Dave Wilken, COO of OHCOW, confirmed that the organization has sent outreach letters to those potentially affected by RB4 (letters were sent out to last known addresses in fall 2021).

There is also an online questionnaire available.

“We are also doing some proactive follow-up calls […] We will start analyzing the responses and assessing where we are later this month,” says Wilken. “At this point we are just at the initial stages of an open-minded reinvestigation.”

“We would be happy to participate in any future intake clinic being organized by OHCOW so we can provide information directly to anyone who has questions about claims related to the Weyerhaeuser construction project. In the meantime, if someone hasn’t yet filed a claim but believes they have a work-related illness that may have originated while working at Weyerhaeuser, we encourage them to contact us and file a claim.

They don’t have to worry if they’re not sure that their illness resulted from their work. That’s our job. It’s always the WSIB’s responsibility to gather all of the relevant information to determine whether someone’s illness is work-related. Possible work-related claims should always be reported. There is no time limit for submitting an occupational disease claim given the time that can elapse between an exposure at the workplace and the onset of an illness.”

As well as the new intake clinic, “the number of people phoning me, asking to be added to our list has grown dramatically,” says Littleford.

Still, Littleford decries the lack on studies on paper mill emissions in Canada, which is part of the problem when it comes to making a WSIB claim because there is a lack of scientific proof.

The road to recognition has been long, and vindication is bittersweet:

Of the approx. 400 workers who worked on the project, Littleford says that 100 of them are already dead.

“Almost a quarter of that workforce has died. Most of them can’t be proved to be related to that job, but every person or widow we talk to is certain it’s from that job.”

This is the eighth part of our series on occupational exposures. Over the coming weeks, COS will continue to shine a spotlight on the issue and speak with occupational disease advocates about the dangers of workplace exposures.