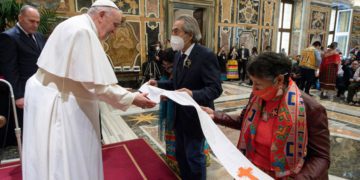 A spokesperson for the Canadian Conference of Catholic Bishops said the Pope had been ‘deeply moved’ by the testimony and wisdom shared by the delegations that travelled to Rome. 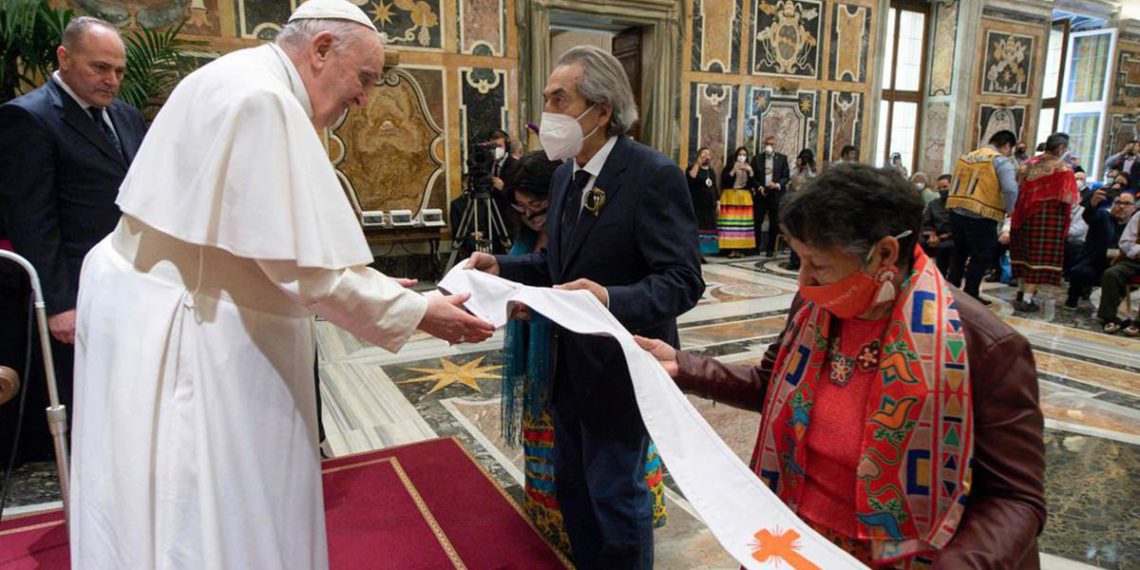 Despite the emotional weight of the Pope’s long-awaited apology for the Catholic Church’s role in Canada’s residential-school system, the gesture is expected to have little legal impact.

Pope Francis stood before a room of about 190 First Nation, Métis and Inuit delegates on Friday and asked for God’s forgiveness for the deplorable conduct of members of the Catholic Church.

“I want to say to you with all my heart: I am very sorry,” he said. The Pontiff also said he will come to Canada, which would meet one of the Truth and Reconciliation Commission’s calls to action.

For many who endured the emotional, physical and sexual abuse documented at those schools, the apology was a powerful step toward healing. Chief Gerald Antoine, the Assembly of First Nations delegation lead, told The Canadian Press the moment was like walking through the snow and seeing fresh moose tracks.

“That is the feeling that I have because there is a possibility,” Antoine said standing just beyond St. Peter’s Square.

But the apology is unlikely to affect legal issues, experts said.

“With the Catholic Church, we’re so desperate for any acknowledgment or accountability we all scrambled to acknowledge this,” said Rob Talach, a London, Ont.-based lawyer who has filed hundreds of lawsuits against the church.

“Legally, it’s not going to make a scintilla of a difference, in my assessment.”

In some ways, the legal question here is an old one. While there are some ongoing proceedings involving the church or its priests — RCMP recently charged a priest living in France who is accused of assaulting children when he lived in Nunavut long ago — the primary attempt to grapple with the legal fallout of residential schools happened almost two decades ago.

The last federally funded school closed in 1997. Almost a decade later, lawyers for First Nation groups, the federal government and the churches — Catholic among them — agreed on the Indian Residential Schools Settlement Agreement.

Although the document did not specifically lay blame, as is typical for settlements, it declared that any eligible student was entitled to compensation. It also created the Truth and Reconciliation Commission, which would eventually criss-cross the country, hearing the stories of survivors.

So far, the Catholic Church has yet to meet the $79 million promise it made to survivors. According to a CBC News investigation, $25 million of that was to be fundraised, though the church ultimately raised less than $4 million in a time period when they spent more than $300 million on church and cathedral building projects.

Experts pointed out the apology is carefully worded, from a legal perspective. Talach notes it apologizes for the acts of certain Catholics rather than the conduct of the Church as a whole.

While the average person might think that an apology would count as an evidence of wrongdoing, they would be incorrect, Talach adds.

Multiple Canadian provinces — including Ontario — have an apology law, which holds that saying sorry doesn’t necessarily mean you’re guilty. (The intent is to try and encourage people to step up and say sorry in the hopes of diffusing an issue that would otherwise end up in a courtroom.)

Further, the Pope is the head of what is considered a sovereign state — the Vatican. As such, its actions can’t be tried in a Canadian jurisdiction, as per our State Immunity Act.

In an email Friday, a spokesperson for the Canadian Conference of Catholic Bishops said that the Pope had been “deeply moved” by the testimony and wisdom shared by the delegations that travelled to Rome.

“These conversations, rather than any legal or financial considerations, motivated his comments today, including the historic apology,” the email read.

Jon Faulds, counsel with Field Law in Alberta, helped lead the lawyers who negotiated the Residential Schools Agreement. He says that while the Pope’s apology doesn’t provide a legal reason to revisit that deal, he wonders if it will renew scrutiny on the church’s actions.

While the agreement achieved “some measure of justice,” he says, it certainly wasn’t perfect, particularly in light of new information that has come to light since it was put to paper.

Most notably, Faulds says he wishes that the existence of hundreds of unmarked graves at former residential schools across the country — the first discovery of which shook the country last summer — had been in the public spotlight when the agreement was being negotiated.

“I think that would have changed the climate of the discussion,” he says.

He says he expects it would have resulted in some sort of resources for help First Nations find their buried children.

While that settlement is final, Faulds says that doesn’t mean that the relationship between the church and the state and Indigenous peoples is settled. “The papal apology, may have some effect on the climate in which other issues are being addressed.”

Veldon Coburn, an assistant professor in the Institute of Indigenous Research and Studies at the University of Ottawa, says the apology has been very meaningful because many survivors went decades without anyone acknowledging what had happened — let alone an apology from someone in power.

As meaningful as the apology is to some, he says it’s critical now that it be followed up with action.

In addition to the full funding to survivors not being paid out, he points out the churches have also made it difficult in many cases for Indigenous people to access records about the residential schools or unmarked graves.

“Just saying sorry, we know, can be very politically expedient to foster sympathy and disarm Indigenous peoples,” he says.

“I don’t think we’re in the business of just listening to words anymore.”

The Indian Residential Schools Crisis Line is available 24 hours a day for anyone experiencing pain or distress as a result of a residential school experience. Support is available at 1-866-925-4419.