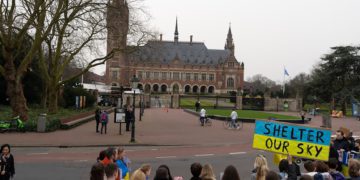 Russia was ordered to halt its invasion of Ukraine by the United Nations’ top court Wednesday, in a preliminary decision that appeared to have largely symbolic significance. 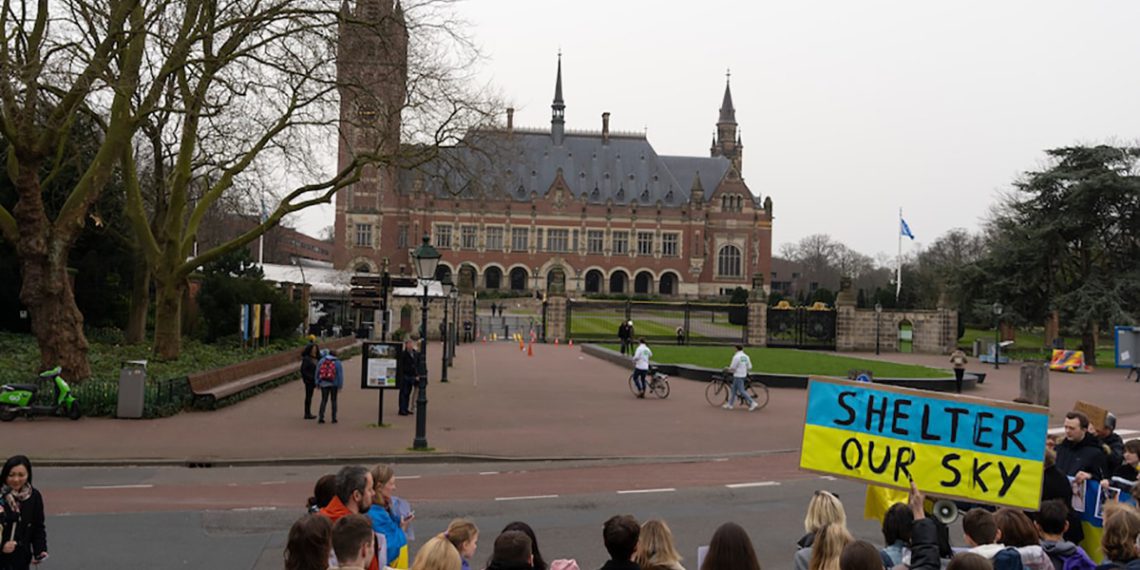 PHOTO: People demonstrate in support of the Ukraine outside the United Nations' top court in The Hague on Wednesday. (Peter Dejong/AP)

Russia was ordered to halt its invasion of Ukraine by the United Nations’ top court Wednesday, in a preliminary decision that appeared to have largely symbolic significance.

Ukraine initiated the case at the International Court of Justice in The Hague to contest President Vladimir Putin’s official explanation for entering the country as an effort to end a “genocide” of pro-Russian separatists.

The court voted 13 to 2 in favor of ordering Russia to “suspend” military operations in Ukraine and to prevent armed units that are directed or supported by Russia from taking further action. Of the two judges in opposition, one was from Russia, the other from China.

Ukrainian President Volodymyr Zelensky said in a tweet that the order constituted a “complete victory in its case against Russia” and that “ignoring the order will isolate Russia even further.”
But while the court’s preliminary order is in theory binding under international law, there were no signs that Moscow would comply. No Russian representatives showed up when Ukraine argued its case last week. They subsequently submitted a document asserting that the court lacked jurisdiction to decide the case.
A final ruling, potentially years away, would also be expected to have negligible impact.

The ICJ does not appear to have a viable path to enforce the decision. Sanctions could be imposed only by the U.N. Security Council, of which Russia is a permanent member and where it has a veto power. The court’s mission is to settle disputes between sovereign nations, and it cannot charge presidents or military leaders with war crimes, for example.

If one of the conflict parties is “ignoring basic principles of law, there’s a question about the utility of invoking the law vis-a-vis that party when you don’t have a strong enforcement power,” said Yuval Shany, an international law expert at Hebrew University in Jerusalem.
But Shany added that a ruling could still have “some value,” for example by debunking the Russian explanation for the invasion.

The proceedings center on Russia’s official explanation for its invasion of Ukraine, which Russian President Vladimir Putin has said is intended to achieve the “denazification” of Ukraine and end a “genocide” in the country’s east. There is no evidence to support Russia’s claims.

Representatives of Ukraine argued last week that the Russian accusations represented a pretext for an illegal invasion.

In its order Wednesday, the court did not rule directly on the facts of the case and whether genocide was taking place but said Ukraine was “asserting a right that is plausible under the Genocide Convention.” To not impose preliminary measures now would open people to “irreparable harm,” the court said.

There is precedent for such a provisional judgment, even if the defendant does not show up. In 1984, Nicaragua won a similar ruling before the ICJ against the United States for its funding and support of the contra rebels seeking to overthrow the Nicaraguan government. The United States refused to participate in the proceedings, arguing the ICJ, one of the founding components of the United Nations system, lacked jurisdiction. But it later blocked U.N. Security Council enforcement, refusing to pay Nicaragua ordered compensation.

In the current case, Ukraine argued that the court has jurisdiction because both Russia and Ukraine have signed the 1948 treaty on the prevention of genocide.

Before the proceedings got underway, ICJ President Joan E. Donoghue had urged Russia’s foreign minister two weeks ago to “act in such a way” that a court order — including one that may order Russia to halt hostilities — can “have its appropriate effects.”

One of Russia’s longtime lawyers, Alain Pellet, resigned in the lead-up to the proceedings, writing in an open letter that it “has become impossible to represent in forums dedicated to the application of the law a country that so cynically despises it.”