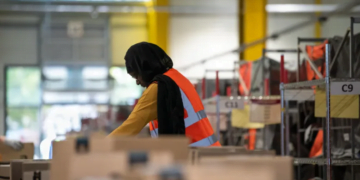 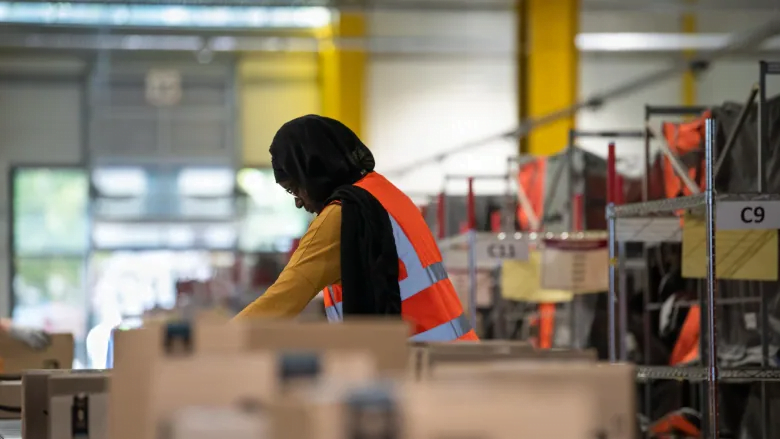 Amazon has 16 warehouses, which it calls fulfilment centres, in Canada and more are being built.

Two men driving for companies delivering packages for Amazon in the Greater Toronto Area tried to organize unions in 2017 and 2018.

And both men — Arash and TK, who don’t want their last names used for fear of reprisal — say they ran into similar tactics to stymie their efforts.

“When the company realized I had started to talk to the other drivers about having a union, they started an anti-union campaign,” said Arash. “The company called an all-hands-on-deck meeting. In that meeting, the owner of the company, he said that Amazon has a problem with unions so if you decide to go unionize they’re just going to cut off our company and give the work to one of the other companies.”

In several interviews with The Fifth Estate’s Mark Kelley, warehouse employees and contract delivery drivers working for Amazon described demanding conditions they say got worse during the pandemic. Consumers were stuck in their homes and Amazon was perfectly positioned to benefit, so sales peaked. In 2020, company figures show that Amazon’s net profit worldwide reportedly grew 84 per cent.

When employees complained about increasingly difficult working conditions or tried to unionize, they say they faced retaliation and unfair practices by Amazon.

The delivery company “fired me and 14 other of my colleagues,” said Arash.

Amazon has a reputation for being anti-union. Brad Stone, a San Francisco-based journalist and author of the Everything Store and Amazon Unbound, says Amazon founder Jeff Bezos “looked around at some of the traditional U.S. automakers and other retailers whose work forces were unionized, and he judged that they limited the company’s flexibility to innovate.”

Stone said his research shows that Amazon has policies in place that are designed to deter workers from staying around too long. For example, unless employees are promoted, they will no longer see any annual raises after three years.

These are mechanisms “to kind of turn the workforce over to make sure the work force doesn’t get entrenched and disgruntled,” Stone said, and there is “an allergy to unionization.”

TK delivered packages for Amazon in 2017 and 2018. He worked for a delivery company that was a subcontractor — or what Amazon calls a “delivery service partner,” but TK said pressure from Amazon created an unreasonable workload.

He usually worked shifts of 10 to 12 hours. According to Amazon’s targets, drivers would be expected to deliver around 17 packages per hour. He used a handheld GPS device from Amazon called a rabbit that tracked his package deliveries.

He said he had to keep working until he delivered all the packages, even if he finished his shift. He often worked seven to nine days straight. There wasn’t much time for lunch or bathroom breaks. He said he felt overworked and underpaid.

In early 2018, TK was fired from his job after trying to organize a union, and reinstated by an Ontario Labour Board decision that found he was wrongfully dismissed.

When he returned to work, his Amazon badge was deactivated and he couldn’t get access to the facility. For several days, he sat in his van in the parking lot for the whole shift. TK said his boss at the delivery company told him he was waiting to get the assignment for him, and came out and took photos of him once in a while.

“They didn’t want me there, they were doing anything they could to just get me out. Like, they just wanted me to realize that this was not worth the fight, just leave.”

Arash worked at a different delivery company but said he had similar problems.

But Arash said there were harsh consequences. Seventy-five per cent of the workers at the delivery company voted for a union, but during the bargaining process, the company declared bankruptcy.

Arash told The Fifth Estate’s Kelley that he believes Amazon was behind what happened and that Amazon gave its work to a non-unionized company.

Amazon wouldn’t comment when asked by The Fifth Estate about the drivers’ allegations.

Amazon workers elsewhere in Canada are also trying to unionize — something that has never been done in North America, with the teamsters’ union leading the drive.

In Canada, there are 16 warehouses — what Amazon calls fulfilment centres — and five more are on the way.

Forty per cent of workers at the Amazon fulfilment centre in Nisku, Alta., signed a petition for union certification. It was sent to the Alberta Labour Board on Sept. 13, 2021. On October 19 another application from workers in the Balzac, Alta,. warehouse was sent for verification. If they are approved, there will be a vote for union representation.

Fifty per cent plus one of the employees will need to vote in favour. The votes could happen before the end of the year. Amazon is likely to mount an aggressive challenge because it has done so in the past.

In 2019, Amazon was planning to put a second headquarters in New York City but eventually changed its mind after executives were grilled at a city council meeting about their attitude toward unions.

In Bessemer, Ala., when Amazon warehouse workers held a vote for unionization in April 2021, Amazon reportedly spent around $10,000 US per day on anti-union consultants.

In the end, employees voted more than two to one against unionization. However, in August, the U.S. National Labour Relations Board recommended a rerun of the union election, saying that Amazon interfered with the union election by installing a mailbox to collect ballots and by distributing paraphernalia encouraging employees to vote against organizing.

Chris Smalls, a former supervisor at an Amazon warehouse in the U.S., said similar things are happening in Staten Island, N.Y., where he is trying to organize employees.

“I’ve seen how this company treats people like numbers. They always put business above … people, profits above people,” he said. “And that’s the one thing that I couldn’t stand when it came to the company.”

Smalls was fired in 2020 after he complained about the lack of COVID-19 protocols. Amazon said it fired him for breaking a quarantine.

“We’ve seen in the middle of the pandemic how capitalism thrives and the rich get rich and the poor get poorer,” Smalls said. “You know unionizing Amazon, this is a way to change that culture.”

The New York attorney general filed a lawsuit in February 2021 against Amazon for failing to provide adequate health and safety measures and for wrongful dismissal in the cases of Smalls and another worker.

This past summer, the International Brotherhood of Teamsters, one of North America’s largest unions, made a commitment to support Amazon employees in their unionizing efforts. In a special resolution, they said: “There is no clearer example of how America is failing the working class than Amazon.”

Amazon was founded in 1994 and has so far been able to keep unions out of its business in North America.

In July, teamsters started showing up outside Amazon fulfilment centres across Canada. A worker at the Calgary warehouse said the teamsters “have been standing in our driveway daily for the last two weeks. They are very very aggressively trying to get a union into Amazon Calgary.”

Amazon has put up signs in the Nisku warehouse with a list of 10 questions that Amazon is suggesting workers ask the union. Question No. 1 asks: “How much will the union charge in monthly dues?”

In Calgary, Amazon HR staff are being brought in from other provinces to talk to workers one on one. One warehouse worker told The Fifth Estate that so far, they had to attend two meetings to discuss union issues.

A representative from the teamsters told The Fifth Estate that a worker said “Amazon workers are scared.”

Sara Mojtehedzadeh, a labour journalist for the Toronto Star who has been investigating issues experienced by Amazon workers for years, said she doesn’t expect much success from the unionizing efforts “because of the nature, the precarity of the job, the power of Amazon. They’re an incredibly powerful company and there are fears of reprisal.”

“The reality is when you have a workforce that feels quite disposable and is relatively low wage, is often new Canadians, often folks who don’t speak English as a first language and who do not have a body to advocate for them.… it’s really difficult to speak up for yourself.”

Amazon did not provide a spokesperson for an interview, but has maintained health and safety is its No. 1 priority.

“Our employees have the choice of whether or not to join a union. They always have,” the company said in a statement to The Fifth Estate.

“As a company, we don’t think unions are the best answer for our employees…. There are plenty of things that we can keep doing better, both in our operations facilities and in our corporate spaces for employees, and that’s our focus — to keep getting better every day.”

Author Stone said given that Amazon is now one of the largest employers in North America, it needs to be seen as a more benevolent employer.

Just last month, Amazon Canada announced it would raise its starting hourly rate for its “front-line” workers from around $17 up to $21.65. The Fifth Estate was told by several sources that salaries have actually been reduced because a monthly bonus was recently cut. The bonus program paid out was based on attendance and sales numbers for the facility.

Arash and TK say it was important for them to try to hold Amazon accountable.

“Me and Arash are not the only ones,” said TK. “I’m sure there are so many others that are feeling what we felt and are continuing to feel that. Maybe all this awareness kind of brings out what is to light, what is happening at Amazon.”